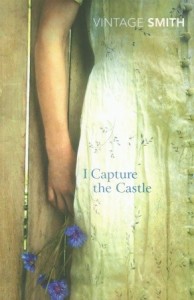 Unlike many of my friends, I didn’t read this book when I was younger – in fact, I wasn’t even aware of its existence. I read 101 Dalmatians many times, and its sequel The Starlight Barking, and thoroughly enjoyed them. I suspect at that age (eight or so) I wouldn’t have thought much of I Capture the Castle. However, at age (ahem), I loved it.

It is a gentle, beautifully written story told in the form of Cassandra Mortmain’s diaries. Cassandra is seventeen, and she lives in a castle with her elder sister Rose, younger brother Thomas, a kind of adopted brother Stephen, her author father and stepmother Topaz. Her father has had writers’ block ever since he was sent to prison for an unfortunate incident where he threatened Cassandra’s (late) mother with a cake knife. As a result the family is struggling to make ends meet – to have a boiled egg with the teatime bread and butter is a treat. Onto the scene come the American owners of the castle, Simon and Neil, and Cassandra finds out about love in all its varieties.

All the way from the classic first line – “I write this sitting in the kitchen sink.” – to the end, I Capture the Castle had me hooked. I believed in all the characters, and cared about them, despite their all-too-apparent flaws. Although the setting is somewhat dated (the book was first published in 1949) I think today’s teenagers might enjoy it as much as I did.