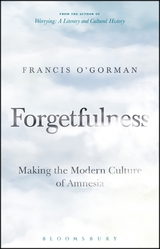 This book is about communal amnesia. Its author, Francis O’Gorman, believes advanced capitalism has triggered processes that detach us from the benefits of our history such as wisdom, pleasure, identity and security and we are, he says, fostering “a dedication to forgetfulness.” This leaves us with the sense that the literature, art and music of the past is valuable only as material for school and university examinations.

O’Gorman, a respected academic, is painstaking in evidencing his arguments, although there’s a digressive and free-fl owing quality to the book. A reflection on John Maynard Keynes’s notion of academic orthodoxy, for example, segues into an assessment of the educational handbook Pimp Your Lesson! which epitomises the principles of relentless “innovation” and “perfection” in teaching.

O’Gorman starts by establishing the “back-story” of forgetting, comparing the restorative power of narratives from antiquity such as The Aeneid to Christian texts, such as St Augustine’s The City of God, which blot out the past. He goes on to consider the impact of “modern forgetting” and the impact of the technology of the industrial revolution on the pace of our lives and our responses to language, literature and history.

He then tackles contemporary capitalism’s reverence of the “new” and considers the impact of the language of business planning and career development. Highlighting the way our obsessive future focus is used to justify political and economic policies, he cites George Osborne’s attempts to sell austerity in terms of delivering a “better” future for the as yet unborn. He also considers the role the concepts of clinical psychology play in alienating us from the past.

The commercialisation of academia creates a diminished sense of intellectual responsibility, an expectation of immediate gratifi cation and a lack of understanding of the effort needed to fully understand the past, O’Gorman contends, and he goes on to discuss a series of non-fiction works on the themes of place and belonging that constitute an antidote to the forgetfulness which is fostered by capitalism and modernism.

I was initially sceptical about O’Gorman’s central idea — for me, contemporary culture seems more like Mervyn Peake’s tradition-bound Gormenghast than Aldous Huxley’s Brave New World, in which “history is bunk.” But my reservations evaporated. Yes, we do live in a Gormenghast-like museum culture, but our understanding of its rituals and texts has been deliberately erased.

While Forgetfulness doesn’t cover every aspect of culture and memory, it is an engaging dissection of an important phenomenon.

This review first appeared in the Morning Star