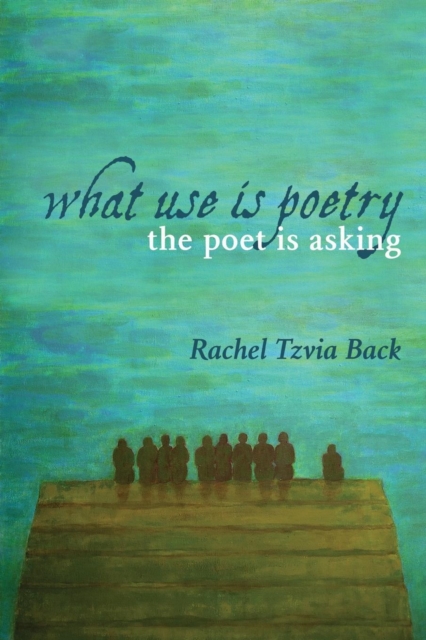 What Use Is Poetry, The Poet Is Asking

“Rachel Tzvia Back transmutes the hard and sharp facts of the world into green and gold in these poems that bristle with desperate hope. She’s always biblical to me, not just because the Galilean landscape she lives in is so like that of those old psalms, but also because she too was a mother who sent her son to war, though she sees in that son another’s son-a boy killed on a beach in far Gaza, while playing. The poet here becomes mother to both, she rises up in need to save both, to spin these new and much needed Psalms.

Shone upon by a tradition of humanism and compassion, Back dares to ask the famous questions first articulated by Fanny Howe: `Where did the days go? Where to now?’ And the last one, the one that always haunts her, throughout all the poems in this painful and wise book: `Are my children safe?’ `We will need a new language,’ Back warns. Good then that she’s giving it to us.”-Kazim Ali”`What Use Is Poetry, the Poet Is Asking,’ and the book itself is the answer: Poetry -this poetry-is necessary, irreplaceable, urgent. This is the best work of an important Israeli-American poet, translator, peace activist and scholar who reminds us, through the courageous beauty of her poems, that not to be political in these times is to collaborate with the forces of darkness.

And what is political for Back couldn’t be more intensely personal, as the mother of an air-force paramedic who suffers from PTSD. Narrating the endless cycle of violence of her region, Back’s poems protest, grieve, and rescue language from its political and commercial appropriations. Throughout she adopts the irreverent tradition of textual allusion in Jewish poetry, allowing herself to radically rewrite the Hebrew Bible, from Genesis to Psalms, and feminize the Jewish liturgy.

This is one of the best new books of poetry I have read in recent years!”-Chana Kronfeld”Poetry may make nothing happen, as Auden infamously wrote, but Rachel Tzvia Back’s poetry makes something delicately yet fiercely come forth: the grief of mothers, the fear of soldiers, the tenderness of a younger brother’s hand, the stones and sand against which cyclamens struggle to flower in Israel/Palestine. This is a poetry that honors the vast silence out of which and into which we go, and the silences before and after extreme violence. Drawing on ancient epic and myth, alert to the rhythms of land- and sea-scapes, Back’s poems arise from a background of unending war, refugee crises, the `sea of small feathered/things’ and `of mortar fire fired.’ These are incantations offered in part to heal a son, to recognize injury, to sound out grief and guilt, but also to register difficult flashes of beauty and the presiding elemental forces of “eastern winds,” sun, moon, season, and sea.