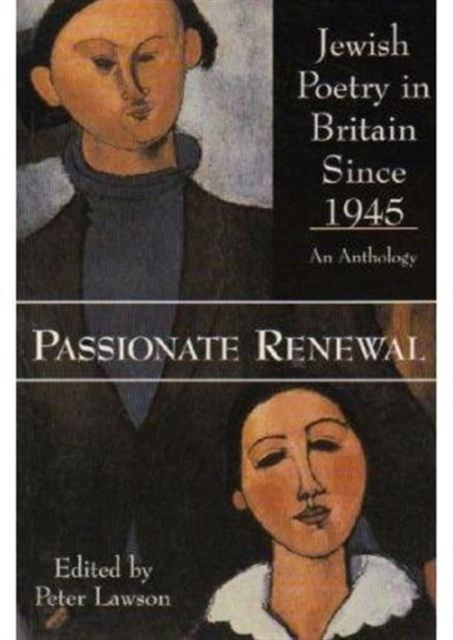 Passionate Renewal is the first anthology celebrating the poetry of British Jews. The book is a major collection, containing substantial numbers of poems by each contributor. The twenty poets write on Jewish and universal subjects.

British Jewish poets have achieved major influence within the poetry world since 1945. This history includes Emanuel Litvinoff’s famous attack on T.S. Eliot’s anti-Semitism; Philip Hobsbaum’s “Group” from the 1960s; Michael Horovitz bringing thousands to hear “poetry of the underground”, his passion being shared by Jeremy Robson. Jon Silkin edited Stand for over forty years; Michael Rosen is one of the best selling poets for children; Daniel Weissbort (with Ted Hughes) set up Modern Poetry in Translation. Michael Hamburger, A.C. Jacobs and others made their name as translators. Elaine Feinstein, George Szirtes, Ruth Fainlight and Dannie Abse are major figures on the poetry circuit. As well as having their own collections, Gerda Mayer, Lotte Kramer and Karen Gershon have been widely anthologised. Many contributors are admired in other fields: criticism; biography; fiction; and, in Bernard Kops case, play writing. Among recent voices, Richard Burns, Jonathan Treitel and Joanne Limburg are becoming well-known, the latter being short-listed for the Forward prize for the best first collection.

“This newly published collection is a joy… and you don’t have to be a ‘literary’ person to appreciate it.” – Alonim

“The act of gathering these (poets) together reveals the importance of Jewish writers to a wider British tradition, both as poets, but also as translators, and communicators with the wider world. This is an important and revealing anthology.” – Poetry Book Society Bulletin

“Lawson’s publishers are to be congratulated on publishing such a well-produced, sturdily bound and very reasonably priced volume. Passionate Renewal should be in every home and library that collects poetry.” – Professor William Baker, Northern Illinois University

“Fifty-five years seperate the oldest from the youngest poet which makes a gratifying sense of an evolving, dynamic tradition and the possibility that Passionate Renewal may be a groundbreaking publication in the service of that tradition.” – Nottingham Evening Post

“The quality is extremely high and, in addition to its appeal to readers with a special interest in judaica, well deserves a wider audience.” – Manifold

“I would like to go on commenting on much more in this generous and fine gathering of poems – on those by Weissbort, Mayer, Kops and Szirtes (another I was unaware was Jewish) – but space is not endless in a magazine. Read the book, it’s worth it.” – Acumen

“…the editor, Peter Lawson, has been meticulous in his research, finding poems from books and pamphlets long out of print… you don’t have to be addicted to gefilte fish and salt beef to enjoy this anthology of 2001.” – Ham & High Books of the Year

Published in association with the European Jewish Publication Society